Home > Blog > A Wild Side Blog 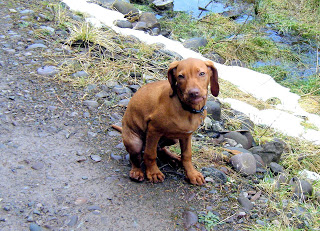 Trying my hand at a Blog for the first time. We were up near Drymen today enjoying what felt like a change in the season. It’s been cold for so long now that I’d almost forgotten what it felt like when the temperature rose into double figures. The snow has all but melted off the paths we’ve been taking of late, but Gemma still got a roll about in the odd patch or three. Vito found every Stygian patch of bog, stretch of mud, length of puddle and the odd stream to cool himself off. Afraid the star of the show today was another Viszla (gaspers!), the 13 week old Boris who stole the show on cuteness.